As the impact of the COVID-19 pandemic continues to be felt, closing the global gender gap has increased by a generation from 99.5 years to 135.6 years, according to the World Economic Forum, Global Gender Gap Report (2021).

Launders and her team of 15 navigate the myriad legal issues arising from a large television, publishing, radio, and digital media business including pre-publication work (and related disputes arising from the published stories), dealing with regulators and industry associations, commercial work (including buying properties for The Block), technology arrangements, advertising sales, and arrangements for the Logies.

In 2021, the team closed high-profile deals with Facebook and Google, following the enactment of the world first News Media Bargaining Code, and extended Nine’s deal with the National Rugby League to the end of 2027.

As a leader, Launders is “pretty good at focusing on the important issues and trying not to get stuck on details that aren’t really going to matter,” she says, an attitude she shares with her team to help them prioritize issues and support the business.

We agree there are great leaders of both sexes and discussed recent scientific and psychology research along with some tips women can adopt at work.

Why do people believe men and women lead differently?

Nearly 100 percent of women and 80 percent of men surveyed by the Innis Company, believed that men and women behave differently as leaders. Specifically, both men and women agreed that women lead by concentrating more on relationships, managing expectations, and seeking input, while men focus on promoting their abilities and final outcomes.

These perceived gendered leadership characteristics are somewhat connected to long-held myths about differences in female and male brains. However, neuroscientist Professor Gina Rippon debunked this theory in her book, The Gendered Brain, TedX talk, “A Gendered World Makes a Gendered Brain,” and her March 2022 International Women’s Day address at the University of Manchester. She cited neuroscientist Lise Eliot’s 2021 meta-analysis of thousands of studies proving that there is hardly any difference between male and female brains.

Our experiences shape our reality

Rippon suggested our brains are predictive coders, plastic, and permeable.

We are constantly seeking social cues, coding experiences as good or bad. We are less likely to approach a social situation if we think we don’t belong, and we are more likely to do something if we think it worked out well the last time.

People respond and change depending on our experiences. London taxi drivers, while working and learning all the London streets had an increased hippocampus (the part of the brain that navigates spatial intelligence) that shrunk when they retired.

Studies priming people before solving a problem with either “people like you are very good” or “people like you are not very good” at the task, showed those with the positive message performed better (the appropriate area of their brains was activated) and those with the negative messaging performed worse (the area of their brains activated was more to do with the processing of the errors rather than solving the problem).

This resonates with Launders, “I think women suffer from imposter syndrome at a higher rate than men and that holds you back in terms of career development. You won’t put yourself forward for opportunities and defer to senior people when you might actually have a better idea. You won’t try to get yourself included when you have been excluded from meetings or projects. In the not-too-distant past, I have shied away from opportunities which thankfully other people called me out on and encouraged me to pursue.”

If our brains code our experiences and can be primed to do things we think we can do well, then women (and men) could encourage other women they know are not speaking up or taking opportunities. Rippon’s three Ps above would suggest women would then keep taking more opportunities and progressing further.

What women can learn from an Italian philosopher

Fake confidence while building the real thing. “If two people perform at the same skill level, the one who seems more confident will end up seeing more competent,” according to Vanek Smith.

Launders suggests sometimes we need to “accept the need to face your fears and give something a go.” She thinks through those situations, including why she was given an opportunity, what could go wrong (which is not much) and understanding what is holding her back. “Hopefully the next step after understanding that is deciding to take the opportunity that’s on offer, putting yourself forward for something.”

Vanek Smith also noted many women experience issues around perfectionism wanting control in what they perceive as an unfair system and “get stuck obsessing over making something so amazingly good that it cannot be denied.” This resonates with Launders who says, “I try to encourage pragmatism over perfectionism — focus on the big issues which are likely to have the most impact either in terms of benefit or avoiding/mitigating a risk. And accept small issues in the interests of getting something done, rather than getting to perfect.”

Vanek Smith also noted that “another thing that famously happens to women is the ‘he-peat,’” described by Astronomer Dr. Nicole Gugliucci as “when a woman suggests an idea and it’s ignored, but then a guy says the same thing and everyone loves it.” The women in the Obama administration came up with the strategy of amplification. When a man interrupts or “he-peats,” another person can “amplify” by referring to what their female colleague was first saying and, for example, noting it is interesting or agreeing and then others do the same.

For Launders this is all too familiar: “For many women in leadership roles today, we’ve worked through being the only women in the room, being talked over, having to talk loudly to be heard (literally), having your excellent idea ignored until a man makes the same suggestion, mansplaining, being delegated to by a more junior man, etc. If you’re aware of those behaviors and the effect of them on women, you will hopefully be alert to the things you can do to counter them. It could simply be making sure the right people are included in a meeting, calling on the quiet person to share their thoughts, and endorsing the proposals and contributions of other women in the room so they can be heard. Some she-peats rather than he-peats.”

The elephant and the mouse

In “Maybe Gender is Not Why Women Lead Differently,” Laura Liswood, secretary general, Council of Women World Leaders, discussed what she called the elephant (the majority) versus the mouse (the minority) construct following studies and interviews with heads of state and ministers and Fortune 500 companies.

While noting not all women or men lead the same way, Liswood described how the elephant and the mouse dynamic appears in the workplace.

“Because women have been in the non-dominant group and have had the additional family responsibilities (which fall disproportionately onto women), women have historically had access to fewer people and also trust fewer people,” says Liswood.

Vanek Smith similarly echoed the significance of networks citing Wall Street CEO Sallie Krawcheck that important decisions about you are made when you are not in the room.  Launders agrees saying: “Big generalization — and I hope this is changing — but many women have to juggle a lot more than many men (family, home, pets, child care and aging parents).”

Launders would also encourage men to take advantage of parental leave entitlements to be full-time caregivers for infant children and then work flexibly — “It’s such a powerful message that childcare is a shared responsibility and that everyone can have a meaningful career and participate fully in the workplace, and do their share on the home front too.”

Liswood suggested that as the non-dominant player, women have a more holistic view and can relate to the stakeholders beyond those with the financial power. While there may be a difference in how women work with stakeholders, it is also a positive point of difference that women could cultivate.

Launders’ tips for building strong stakeholder relationships include being “interested in the business and showing your interest to the people you engage with. One of my colleagues recently told me how much he loves that I watch our shows, and share my opinions. I couldn’t imagine working in this business and not watching our shows, reading our papers, and so on.”

Launders also recommended being “interested in the people you work with. We are all more than our job and knowing and remembering some details about people’s lives outside work is a simple but meaningful way to demonstrate that you see your colleagues as more than their jobs.”

Women tend to be better prepared

Recent studies (including by behavioral economist Paola Cecchi-Dimeglio) have shown that women and men are measured by different standards.  The “same communication style is considered ‘sharp elbows’ and ‘too aggressive’ in women, yet is considered ‘being a strong leader’ who ‘has potential’ in men,” says Liswood.

This is a challenging issue for Launders, who says “It’s important to be true to your own style. If you’re adopting a ‘sharp elbows’ communication style in the workplace because that’s what’s modelled by leaders but doesn’t reflect your own style, it will be both exhausting and not authentic. But if that’s what your style actually is, own it.”

Launders is a positive example of successfully navigating leadership and the workplace with judgement and confidence while recognizing that to make any significant change, women need other women … but they also need men. Her insightful and practical suggestions to both men and women that are championing change are:

Men “still need to be the champions of change. I’d encourage all men in leadership positions to think about who is in the room for every meeting — if it’s all men, you need to change that. Invite some women to the meeting (and make sure they have the opportunity to contribute), include some up-and-comers in development opportunities and actively support and promote people working flexibly.”

Launders cites the late Madeline Albright, former US Secretary of State: “There’s a special place in hell for women who don’t help other women,” and adds, “I’d like to think that leadership for most women had that as a tenet and we stay alert to the opportunities to use our roles to help other women, or other people in minority positions.” 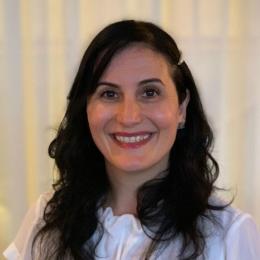