A conversation with Mel Scott about her personal branding success

A few weeks ago, I had the pleasure of chatting about personal branding with Mel Scott, the host of Counsel, a successful self-made podcast about in-house lawyer life, and senior lawyer at Megaport, a global technology company founded and headquartered in Brisbane, Australia.

Over the past few years, Scott has built a strong and powerful brand through her podcast and across multiple platforms (LinkedIn, Instagram, and, more recently, TikTok), where she shares her personal insights on all things in-house with the aim of giving back to those more junior than her in the legal profession as well as law students about to embark on their career. “What would Mel of two or five years ago really want to hear,” is her guiding mantra.

Scott’s journey into personal branding started in January 2020 when she was listening to a podcast by Gary Vaynerchuk. Something he said made her “flip the switch” and take all her fear and doubt about starting a podcast and turn it into action. It started with her googling “how to start a podcast,” and over the next many months, she learned a lot about sound and recording and, in her own words, made many mistakes. But as she told me, “I couldn’t miss the opportunity.”

What is this “opportunity” and why should in-house lawyers care about personal branding?

Over the earlier part of my career, I had a negative perception of personal branding. To me, personal branding meant being other than who you are — adopting a persona that you wished to present to your target audience. When I became an in-house lawyer, I was relieved that my clients were now internal colleagues as it would mean the end of networking events, selling and building a “fake” personal brand.

The reality is that we all have a personal brand, whether intentional or unintentional. In-house lawyers are no exception. As Scott puts it, “Personal branding is another word for reputation. We all have a reputation, and with modern communication tools, we can craft it in a way we haven’t been able to before. I would encourage anyone who wants to harness their reputation and take control of it, and not have other people dictate who you are and how you’re thought about, to build their own personal brand.”

Personally, I’ve discovered over the last few years that building your reputation can simply mean stepping more consciously and purposefully into your own power and authenticity by talking about the things that matter to you and the things that make you who you are. It doesn’t have to be a false persona — rather, it is you telling the world that this is who you are.

Building your own personal brand also helps to build real connections with colleagues. Scott told me that her podcast, though based around legal content, helped humanize her to her colleagues, many of whom she hadn’t met in person. It made them see her as Mel Scott, the person, not just Mel Scott, the in-house lawyer.

Job opportunities, involvement in committees, and speaking opportunities started coming her way. Her podcast is now also self-sufficient through sponsorship. “Your online presence is like a resume. I was being asked to bring my expertise to groups I would not have otherwise thought I could have added valued to … And the best thing was connecting with the most amazing humans who I may have otherwise met at a conference here or there and said hello to, but never would have gotten to know to the same depth.”

Given the opportunity, why do we not see more in-house counsel building their personal brand?

“Time commitment. It’s like going to the gym. You don’t find the time; you make the time.” This is Scott’s mantra for tending to your personal brand.

In the early days of creating her podcast, Scott said she would spend the time she may have otherwise been on the couch watching Netflix working on her podcast. And when her husband was off playing golf on Saturdays, she would also spend that time working on her “passion project.”

“You need to carve out the time,” she says. “If it’s important to you, you make the time. If it’s not important, you make excuses.”

I resonated deeply with what Scott shared as I began my own personal branding journey in 2020 with a seven-month-old baby and a remote learning six-year-old at home. Despite being busier than ever in all aspects of my life, I carved out 10–15 minutes late at night to draft my LinkedIn posts and half an hour in the mornings to review and edit them, post, and then comment. Later, when my daughter was back at school, I would take videos in the car while waiting for my coffee at a local cafe. I made the time because of the energy that talking about my truth and my views gave me and the opportunities it afforded me.

There seems to be a common misconception that content creation takes a lot of time. As Scott said, “You need to take the lawyer hat off and put your creative hat on. It’s a very different way of thinking. You can’t lawyer your way through this because you won’t do it. It’ll be one perfect post every six months and that really doesn’t make a dent.”

So how does one then get one started?

Simply, “You have to just do,” says Scott.

“You can have all the intent to show up, but it’s not valuable unless followed through by action. You need to start with what you have. Take imperfection action. Don’t overthink it. One little post. One little tweet. One TikTok. Over time, you’ll learn what works and what lights you up. It was when I was trying to be something I was not or adopt the trends of the day that it didn’t work. It didn’t resonate with me. You learn from that,” Scott says.

“The time is now,” Scott says. “You need a curious brain and a beginner’s mindset. It’s never too early and never too late to start. And you will get better with practice.”

It is easy to get overwhelmed by others on social media who have powerful personal brands. Remember, they too started somewhere and built their brand. They too will have suffered from imposter syndrome and fear. They too will have wondered, “Do my thoughts really matter?”

When I first started posting on LinkedIn, I would get little views, reactions, and engagement. Persistence is key. Consistency is important. Being yourself is powerful.

Scott is right. We all have a reputation.

The question is: Do you want to dictate what that reputation is or are you going to allow others to control your narrative? 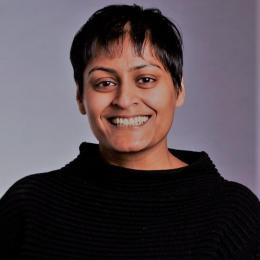