“You aren’t like most attorneys,” is the reaction Kate Shelby gets from her colleagues at Resultant, LLC, who note that she is not quick to say no, and instead looks for ways to solve problems. Strategically solving problems by integrating smart processes, tech solutions, and data-driven decision-making is how Kate became the first general counsel of Resultant, LLC, a technology and data consulting firm.

“The first general counsel of any organization has a steep mountain to climb getting management to trust their advice and align to all of the needed changes,” says Kate. Because Kate, a former government and business executive, could empathize deeply with Resultant’s executives and clients and “speak their language,” she was able to solidify the legal division’s role in the most important areas of the business.

When the chance to work for Resultant came up, Kate “saw an opportunity in a company that was experiencing a lot of growth and is helping communities and making the world a better place.” Kate hit the ground running in becoming the GC “with no budget and no staff, all while dealing with the regulatory requirements of the pandemic, a post-acquisition integration, an official company rebrand, and the explosive growth of Resultant.”

In the first 30 days as GC, Kate devised a new contract strategy and led the Resultant executive team in selecting a new legal matter management solution, which included input from stakeholders. The software solution included significant contract workflow automations and customizations that were designed in partnership with business stakeholders.

Before taking on the GC role a year ago, Kate led strategic initiatives to streamline work and achieve meaningful outcomes faster, which helped to get buy-in from management on her plans for the legal division. She was determined “not to run the legal division with just people and hard copy,” but to find tech solutions that could be scaled within Resultant.

Kate found that the solution was to implement a sustainable and scalable legal strategy that prioritized Resultant’s needs and a software solution with a data collection component, which is part of her drive to embrace technology as the foundation of the legal department.

Contract management is at the core of most companies, and in the first few months on the job, Kate implemented processes to reduce legal risk while improving speed and progress toward company goals, created new contract templates, and developed a legal reporting strategy after collecting more than 85,000 legal papers across the company.

Being a certified SAFe Agile Leader has helped Kate establish the foundational pieces of the legal division, particularly because she wants to build something sustainable over the next five years. SAFe stands for “scaled agile framework,” which is a set of workflow patterns to help guide companies in scaling agile development of technology solutions. Rather than developing a technology-based product, agile development breaks a large system implementation into basic parts with a heavy emphasis on stakeholders' involvement, buy-in, and feedback.

The most immediate result of intentionally building a legal division that embraced technology, sustainability, and scalability was to free up two support staff, who had spent most of their time obtaining signatures for contracts, so they could devote their time to more complex needs in the organization. In just three quarters, Kate’s strategy matured rapidly to automate the work of at least four legal team members and led to Kate and her team being able to respond to more than 700 legal requests in first quarter 2022 alone.

Kate says one of her first actions when she became Resultant’s GC was to join ACC because “there is a lot of loneliness in the GC profession. I needed a place where I could bounce questions off of others and talk through issues that other legal in-house counsel are having. If I needed an example, I needed to be able to get it quickly.”

When she began her role as GC, the pandemic was impacting Resultant’s business, and Kate found she “had to be intentional about reaching out and making sure people weren’t suffering in silence due to remote work.” She makes it a point to set reminders for herself to check on people and see how they are doing.

“The impact you make is more important than anything else,” is the advice Kate gives to mentees. “There are people who will chase awards and chase attention, which are the things that feed a person’s ego. The best leaders don’t do that. Instead, focus on being authentically good at your job and the impact you can have as a result. The long-term respect you earn in this world is from the impact you have, and that is what matters at the end of the day. As you look back on your career, are you going to think about an award, or are you going to think about the impact your hard work and smart leadership had on your community?”

Outside of work, Kate says she has “the best job in the entire world,” which is parenting her two children and coaching them in U4-U6 soccer. “Don’t miss the opportunity to be a leader one-on-one with children in your community because they need to see good examples of adult behavior in all situations.” Those moments matter, she says, as much as any accomplishment at work.

What is the best advice you received from a mentor?

Don’t take the easy job or the easy way – spend time early in your career doing things that are hard and stretch yourself in different ways that make you better.

How do you balance your work with your life?

Put what matters first and spend your time wisely.  Ten minutes of planning every morning and setting clear boundaries even in emergency or high-volume situations will streamline your day and help you focus and accomplish more at work and at home. 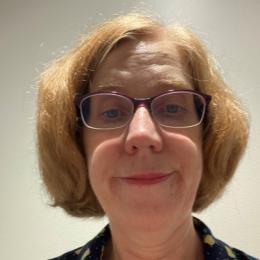