Whitfield Caughman went in-house because she wanted not only to solve problems but to prevent problems from happening in the first place. “I love being able to help people, but one of the issues that I kept finding [in Big Law] was that I was getting a problem that was fully baked,” she shares. “If I had been there when it was evolving, I could have prevented it from happening at all."

As deputy general counsel at Paradies Lagardère, Whitfield has created efficiencies and synergies to support the airport concessionaire through mergers and acquisitions (M&A), not to mention a pandemic. “As you grow as a legal department, you have to put processes and procedures in place so there’s consistency, collaboration, and thought sharing across the board,” she states.

When the pandemic significantly impacted the airport industry, Whitfield developed workstreams to drive long-term business potential and prioritize staff. She brought all IT contracting in-house to reduce expenses, created new prioritization protocols to more efficiently serve her business partners, and drafted pre-approved form agreements to support the influx of work.

Given that the company was undergoing a business systems transformation when COVID-19 hit, she rolled out the “Help Us Help You” initiative in which cross-functional stakeholders work with legal to align on priority contracts to ensure time and resources were allocated appropriately. “For quite a time, we didn’t know what would happen, but we banded together and pulled through bigger and better. It was a true team effort,” she says. “I’m fortunate to have the team and the mentorship that I do.”

In her new role as vice president of legal and compliance, Whitfield’s next task is developing a compliance workstream. ACC has been a resource in this endeavor, offering a CLE on building out a compliance department. “I brought the deck to my CFO about options going forward and building that workstream,” Whitfield says.

Another resource in Whitfield’s in-house career is her litigation background from private practice, which ranged from general litigation to commercial and employment litigation. “I know what a contract looks like when the rubber meets the road. I’m able to focus on the things that really matter, from a practical perspective and not theoretical risk, so it’s helped me effectively tackle the corporate issues,” she says. “And I’ve spent most of my life cross-examining people. Going in-house, you can’t be afraid of asking questions.”

Her familiarity with cross-examination goes back further than her professional career. Whitfield comes from a family of lawyers. Her mother was the first female attorney and managing partner at the New Orleans law firm, Chaffe McCall, retiring after 46 years as a commercial litigator. Her father and younger brother are tax attorneys, and her older brother is a partner in his firm’s Investment Funds Practice Group.

Despite a family calling, Whitfield’s childhood dream was to be on the stage. That all changed when she was 10 years old and watched her mother deliver an opening statement at a jury trial. “It changed my life,” she says, “I went from wanting to be a rockstar or actress to wanting to be a lawyer. Everything I did since then was to that end.”

Following in her parents’ footsteps, Whitfield attended law school at Tulane University in the civil law track. At the start of her second year, Hurricane Katrina hit. It devastated the city and swept away her carefully laid plans for the future. “My 2L clerkship interviews were scheduled for the week of the hurricane, and it was too late to interview outside of New Orleans. I had also just gotten my now-husband to move down to New Orleans three months before Katrina,” she recalls. Evacuating New Orleans, they eventually made it to Atlanta, where her husband is from and where Whitfield had gone to undergrad.

Her alma mater, Emory University, took her and other students in so they could continue their studies, free of cost; publishers donated copies of textbooks; and the Jewish Federation helped Whitfield and her roommate find an apartment, and ultimately, a 2L clerkship at an Atlanta law firm. “One of the women in the Jewish federation happened to have a husband who is a partner at a law firm in Atlanta,” she explains. “He met with me and offered to get me an interview for a clerkship even though they were already in second-round interviews.” Whitfield got the clerkship and received an offer post-clerkship to stay in Atlanta. “The rest is history, and a little bit of a different path than I had planned,” she says.

Touched by the generosity of others during that time, Whitfield established an externship program at Paradies Lagardère to give back to local law students. The program partners with Georgia State and Emory to provide a rare opportunity for in-house legal practice experience and ensures hard-to-find corporate options are readily available. Whitfield says she is proud to share that, during the height of the pandemic, when many students were struggling to find or keep job offers, she hired her first staff attorney for corporate contract work through that externship program, noting “she is a rockstar.”

Whitfield continues to honor her New Orleans roots while living in Atlanta. Each year, she gives a presentation to the local elementary school on the history and customs of the city and Mardi Gras celebration. She enjoys instilling a love for her hometown in her children, but she doesn’t expect them to take up the family mantel of law. “But as much as I warn them off, my daughter dressed up as a lawyer for career day,” she shares. “She’s six, mind you.”

What is some of the best advice you’ve received about work-life balance?

We don’t have much time in the day, between being a mother and being a professional career woman. I got some advice when I was still in Big Law from an attorney who was also a mother. She said when you only have a limited amount of time in the day, you have to be present with your children and let them see you being present. So when you volunteer, try to do something where your kids realize that you are taking an interest in what they do and take on a task that makes it visible to them. That doesn’t mean that things that aren’t seen aren’t important; it just means that letting your children know that you’re a career woman, but also see that you’re a mother is very important.

How has ACC membership helped you in your career?

For me, ACC has really brought to the table the ability to get resources. We’re a growing legal department functioning on a very high level with a lot of work, so being mindful of our structure and what makes sense was top of mind as we built and continue to build the department. But who do you ask? Well, ACC has tons of resources on what different legal departments look like and the theory behind how to structure them — multiple levels versus single levels — and what makes sense for you. That was really helpful. 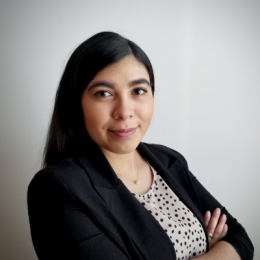