“Imagine a gender equal world. A world free of bias, stereotypes, and discrimination. A world that is diverse, equitable, and inclusive. A world where difference is valued and celebrated. Together we can forge women's equality. Collectively we can all #BreakTheBias.”

This is extremely hard to write, but it's too important not to.

Being someone who champions DEI, I am upset that the world is still often reluctant to discuss it. We still pick and choose when diversity, equity, and inclusion matter. Although there are degrees of biases, and completely eradicating bias is impossible, DEI is a critical, pressing topic.

I find it disturbing that we cannot hide conscious and unconscious biases even during times of need and humanitarian crises. Everyone has experienced bias. Human beings are naturally biased.

The only way we can make sense of the world is to simplify it by putting things and people into the mental “buckets” that are either good or bad, interesting or boring, etc. An unbiased human would be unable to function, and would waste vast amounts of time trying to experience the world as it is, without making any inferences or assumptions that help us understand it. But while eliminating bias is impossible, there are degrees of bias.

The issue is that some individuals are proud of their biases — they even tout them. It’s especially scary when they are in positions to lead or influence others.

I will not sugarcoat it. I experience bias almost every day. As a woman of color, a woman of faith, a mother, a caregiver, for my nationality, my looks, my age … the list goes on. But while it used to bother me, it now fuels me to act so future generations can hopefully live in a world where equity and integration are the norms.

I learned to nudge people toward certain behaviors that would help them become more open, empathetic, and less biased. Here are tips on how you can do the similarly:

I do not confront the people who bother me by their ignorance or bias. I don’t impose my level of activism or unbiasedness, empathy, or humanity on others.

I understand that people are at different stages in their feelings about being empathetic and unbiased. So, I don’t talk. I act. I do. The easiest way to inspire others is with your actions. Actions speak louder than words. Be there to lift others up but don’t suffocate them and make them feel inferior to you.

Do community service. Volunteer. Mentor and sponsor other underrepresented candidates, including women. If you are a leader in your organization, empower your team members to instill work-life balance and normalize a flexible work environment as one effort in recognizing diverse lifestyles. Partner with others internally and externally to multiply efforts.

Hopefully, others won’t be forced to face the unneeded challenges you faced. Take baby steps toward creating a more equitable and inclusive world that embraces everyone regardless of who they are, how they look, or where they come from. Demonstrate that we are the product of both our environments and what we make out of our circumstances.

I analyze what others may be thinking and their motives and attitudes. Then I try to put myself in their shoes and justify why they may think or feel as they do. This simple exercise helps me create a habit for empathic thinking and feeling, which has made me more tolerant, and perhaps even less biased.

3. Be honest with yourself and make your biases explicit

Get real: Unconscious biases are deep inside of us. Unless we identify them and talk about them, they are not going to change. Awareness of bias is a necessary step for dealing with it, even if it’s not the entire antidote. Simply being aware of our biases can immediately start us on a path toward reducing our reliance on generalizations or stereotypes.

Try taking tests that detect biases. There is a range of widely used and well-designed free tests available through the internet such as those by Harvard University or Cultural Intelligence Center. They provide instant feedback and tell you how you compare to others. The tests help people looking to identify their unconscious biases. In other words, it will not solve the problem of people who are aware they are racist and proud of it, but it is a good start for most.

4. Monitor and control your behaviors

Question your first impressions and extreme reactions to people. Reflect on any rapid decisions you make (e.g., were they made objectively or was my unconscious bias at play?). Ultimately, what matters is not how you feel or what you think about people deep down, but how you behave. This is so obvious that we almost forget it.

Consider two individuals: One who is prejudiced but consistently behaves in an inclusive way, to the point that their reputation is one of fairness, and another who, despite being quite open-minded, behaves in a derogatory and prejudiced manner.

If you think this is unlikely to happen, think again. Research shows that the number of people who “believe” in the inferiority of certain nationalities, genders, ethnicities, or religious groups is significantly larger than those who “behave” objectionably toward those very same groups. It is a blessing in disguise. So while we will never be bias-free, we can keep our own biases in check, and not brag about them to the world. That should be the least you and those who are interested in living in a more peaceful and equitable world can hope for.

Learn to tolerate and perhaps to like people who think, act, or feel very differently than you do. Don’t sit with the same colleague every day. Move around and spend time with people who are different from you.

This was not an easy step for me, but I make a conscious effort to spend time and interact with people who question or dislike my values, to at least understand how they think. I listen to podcasts that question my own thoughts. It’s been an interesting experience.

And the approach is scientifically proven. Simply being exposed to people who are different than us tends to make us a bit more open-minded and tolerant. I promise you will be surprised that, despite the differences, there are many more commonalities and overlaps between both your worlds.

Unintentional bias is more likely when you make fast on-the-spot decisions or act on the spur of the moment, so be sure to take a step back. We tell our kids to “think before you post,” but, as adults, we need to be smart and think before making any decision, especially critical ones that could end up damaging relationships.

7. Avoid relying only on your gut instinct

It is always better to ask what someone means by what they say or do. It is an easy and simple step. There is always something new we can learn. Don’t assume you know best all the time. You may easily jump to the wrong conclusion and could regret it later.

8. Apologize if you get it wrong

We can only deal with biases if we’re honest, admit our mistakes, and learn from them.

9. Don’t beat yourself up

Having conscious or unconscious biases doesn’t make me or you a bad person. Be kind to yourself, try to accept whatever biases you’ve got, and just focus on working to overcome them.

10. Speak out if you notice bias

One last ask, and the most important of them all, is for each of us to look closer to home. Think about the assumptions and presumptions we make about people based on the way they look, dress, their gender, ethnicity, disability, accent, or the color of their skin. Reflect on the off-handed comments we could be making (or let slide) in meetings or on calls, the moments when a colleague or a friend needed us to be their ally and stand up and challenge someone’s racist rhetoric, etc. I could go on!

Take time to understand that discrimination is a global pandemic and unveils itself in hundreds of forms depending on where you are. No longer just stand by and be non-racist or non-sexist. Stand up, stand alongside those who are treated as lesser-than to demonstrate you are anti-racist and anti-sexist. Challenge discrimination and prejudice in whatever form you find it, however it manifests. What matters is not our face, looks, or wealth, but our virtues, actions, and deeds.

If we all do that, then we have a chance of making a difference to break the bias.

Disclaimer: Information/opinions shared are personal and do not represent the author’s current or previous employer. 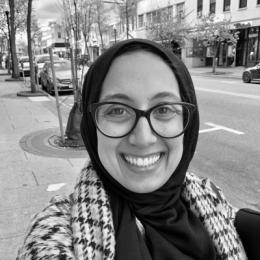